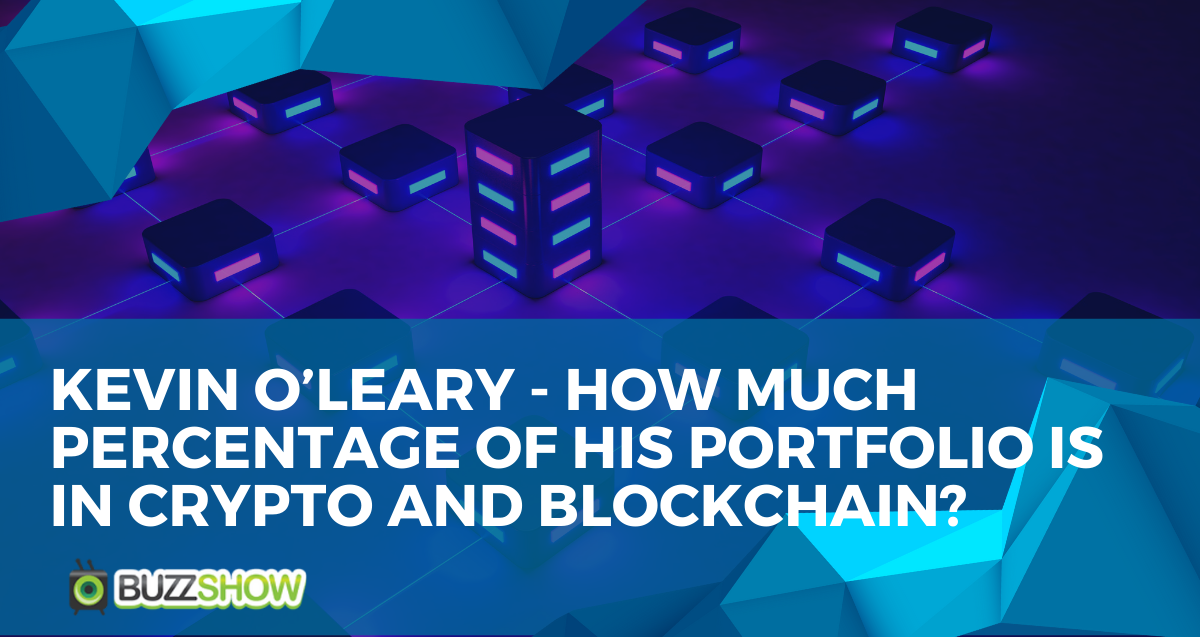 Kevin O’Leary – How Much Percentage of his Portfolio is in Crypto and Blockchain?

Kevin O’Leary – How Much Percentage of his Portfolio is in Crypto and Blockchain?

Kevin O’Leary, a celebrity investor, claims that he invests in 32 different crypto and blockchain projects with 20 percent of his portfolio. He claims to possess Ethereum, Solana, Helium, and Avalanche, among other things. In his recent interview with CNBC, he says he owns “millions of dollars” in a variety of crypto assets. “You have to diversify,” he added. “I own 32 different positions, including FTX equities.”

Who is Kevin O’Leary

Terence Thomas Kevin O’Leary also known as “Mr. Wonderful”, is a Canadian businessman, entrepreneur, author, politician, and television presenter. He participated in a number of Canadian television shows between 2004 and 2014, including the business news shows SqueezePlay, The Lang, and O’Leary Exchange, as well as the reality shows Dragons’ Den and Redemption Inc. He made an appearance on Project Earth on the Discovery Channel in 2008. He has been a regular on Shark Tank, the American version of Dragons’ Den, since 2009.

SoftKey Software Products, a technology company that sold software aimed at family education and entertainment, was co-founded by O’Leary. SoftKey bought rival companies such as Compton’s New Media, The Learning Company, and Broderbund in the late 1980s and 1990s. SoftKey was eventually renamed The Learning Company before being purchased by Mattel in 1999, making O’Leary a multimillionaire.

Kevin O’Leary’s net worth is expected to be at $400 million in 2022. O’Leary is one of the world’s wealthiest businesspeople.

Kevin O’Leary recently spoke to CNBC about his interest in investing in cryptocurrency. He noted that cryptocurrencies and blockchain assets constitute 20% of his portfolio in the interview. “Millions of dollars” have been invested in crypto assets by O’Leary, according to CNBC.

Andrew Ross Sorkin asked O’Leary whether some cryptocurrencies might not exist in a decade, to which O’Leary responded that he’s taken that into consideration.

“The whole point is that you can’t tell who is going to win. Is Ethereum going to win? Is Solana going to win? Is it Helium or is it Avalanche? I own them all,” said O’Leary- the venture capitalist. He’s also the founder and chairman of O’Shares ETFs.

In his opinion, the smartest engineers in the world today are going to work for blockchain companies. Although the US is far behind countries like Canada and Switzerland in the global crypto race, he stressed that the world waits for the US to act as a leader on digital assets.

Should You Include Crypto in Your Investment Portfolio?

Cryptocurrencies are all the rage, but figuring out how they fit into a portfolio is a challenge. Money managers often strive to maximize gains while limiting losses by calculating the expected risk and return of various investments and then putting together a portfolio that provides the optimal risk-return trade-off. Volatility, often known as the standard deviation in finance, is the most extensively utilized risk indicator. Because volatility tends to hug a tight range over multi-year periods, historical averages are a reasonable indication of future price swings for traditional investments like stocks and bonds.

It’s more difficult to predict future returns. It is possible for investors to rely on historical averages. Nevertheless, multi-year returns often resemble their historical average, but sometimes deviate significantly from it, usually during market peaks.

In the case of cryptocurrencies, it is impossible to say how much to invest in them because no one knows what drives cryptocurrency pricing, and the answer may take a long time to come. Investors have long struggled to predict projected returns for fiat currencies and commodities such as oil, cereals, and metals, which, like cryptocurrencies, do not generate interest, earnings, or dividends independent from their price.

There is little history and even less insight into what moves cryptocurrency, so investors are left guessing what to expect and how to integrate them into their portfolios. A tiny percentage of an investor’s portfolio can be devoted to cryptocurrencies if they are willing to stick with it. Cryptocurrencies have been touted as a game-changing technology that has the potential to change a variety of sectors. They can also serve as a secure store of wealth because they cannot be printed or seized. As blockchain technology advances, some speculative behavior is to be expected in the cryptocurrency arena. On the other hand, new investors should also be wary of psychological traps like herd instinct, FOMO, and the Greater Fool Fallacy, which may affect whether they take a sensible risk or a foolish one.

What are the Advantages of Investing in Cryptocurrency?

Using and investing in cryptocurrency has numerous advantages.

People without bank accounts can use cryptocurrency to get financial services without having to go via a centralized institution. People who do not use traditional banking services may be able to use cryptocurrencies to perform online transactions or send money to loved ones.

Undoubtedly cryptocurrencies are highly volatile and potential to skyrocket. That is why investors like Kevin O’Leary show their interest in them. Research and understanding of crypto are necessary. Moreover, blockchain technology and cryptocurrency are together giving us platforms like BuzzShow Network, Dtube, Steem, etc. these platforms are giving a wide range of user benefits. These technologies really have a bright future.

Just Dig deep by Yourself.