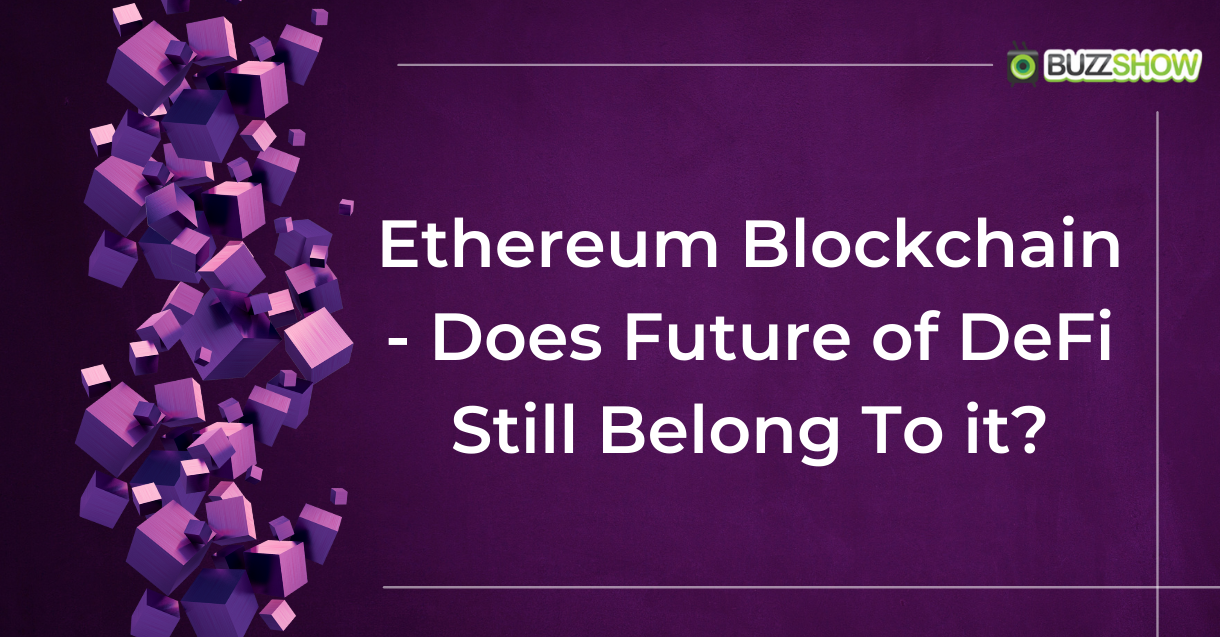 Ethereum Blockchain – Does the Future of DeFi Still Belong To it?

Ethereum Blockchain – Does the Future of DeFi Still Belong To it?

Ethereum is an open-source, decentralized blockchain that enables users to build smart contracts. Ether, or ETH, is the platform’s native coin. Anyone can utilize the platform to create permanent and irreversible decentralized applications with which users can engage.

With Ethereum, you can securely execute and verify smart contract code through a decentralized blockchain network. Without a trustworthy central authority, participants can transact directly with each other. Since transaction records are immutable, verifiable, and securely distributed across the network, participants have complete control over their transaction records. Transactions are sent and received by Ethereum accounts created by users. A sender must use Ether, Ethereum’s native coin, as a cost associated with processing transactions on the network.

Using the Ethereum blockchain has a number of advantages. Here are a few examples:

Smart contracts are a type of digital contract that enables a user to transact anything if certain conditions are met. It could be money, real estate, business shares, or anything else, to name a few examples. The parties to an Ethereum smart contract, like any other contract, can predetermine the contract terms, and the contract will only execute if all parties agree. While neither party will be identified, the contract will be recorded on the public ledger so that it may be verified.

Another benefit of the Ethereum blockchain is that it allows for true traceability. Because every transaction data is recorded on the ledger and no one can change it, it may be used to construct a complete traceability system. This system may also help firms track their products or transactions, as well as generate a complete report on their overall success and prosperity. It can also help uncover any inefficiencies in the system and address them as soon as they are discovered.

Since the turn of the century, non-fungible tokens have become increasingly popular around the world. NFTs are indivisible, one-of-a-kind digital tokens that can be used to certify the authenticity of both digital and physical rare commodities. It might be a piece of artwork, an image, a video clip, or any other type of one-of-a-kind asset.

Ethereum pioneered the concept of non-fungible tokens. Ethereum provides ERC standards for creating new types of tokens, and it has proven to be incredibly useful to the blockchain community over time. NFTs can be used by business owners to tokenize their work and ensure that it is unique and theirs alone. Ownership information is saved and preserved on the blockchain network. Because they provide platform interoperability, NFTs are also gaining interest in the gaming sector.

ERC-721 was created expressly for the generation of NFTs, which are one-of-a-kind, non-tradable tokens. However, several popular NFTs continue to use a token standard that is similar to the ERC-20 token.

The EVM is a difficult idea to grasp. EVM, which is fundamentally an appropriate hardware and software co-relation architecture, is used to enable Smart Contracts. This virtual machine can be used by any device or computer connected to the Ethereum network to run the untrusted programs included in the Smart Contract. A Smart Contract validates the transaction when the requirement is met. The EVM is used in Smart Contracts to resolve difficulties utilizing Turing complete software. The Ethereum platform is used by blockchain developers to create decentralized applications. Because it has no delay, it’s ideal for storing objects that can’t be modified.

One of the many advantages of the Ethereum network is its reduced transaction fees. When compared to Bitcoin, the cost of transacting anywhere in the globe using Ethereum is far lower. To get started, all you’ll need is a decentralized wallet. Although Ethereum Gas prices can sometimes rise, sending money over this network is still easier. Furthermore, executing a transaction in the system takes 15-30 seconds on average, thus it is unquestionably the faster alternative.

Another benefit of Ethereum is that it enables the creation of a decentralized platform. This blockchain platform allows developers to create a wide range of decentralized applications.

The majority of DApps run on the Ethereum blockchain technology. Despite the fact that there are several platforms for developing applications, none of them can match Ethereum’s open platform.

The Advantages of Developing Ethereum

Thanks to the Solidity scripting language and the Ethereum Virtual Machine, Ethereum provides an exceptionally flexible foundation for developing decentralized apps. Because of Ethereum’s maturity, a variety of developer tools have evolved, as well as well-established best practices that help developers of decentralized applications.

As a result, Ethereum applications provide a superior user experience, with wallets like MetaMask, Argent, and Rainbow providing simple interfaces for interacting with the Ethereum blockchain and smart contracts. With a wide range of decentralized applications, Ethereum solidified its position as a leading platform by appealing to its large user base. The Ethereum 2.0 protocol, which is currently in development and backward compatible, will allow for a more scalable network on which to build decentralized applications in the future that require higher transaction throughput.

The rise of Ethereum to its highest position begins with a look at Bitcoin’s history and current situation. With Ethereum, users could build smart contracts in a way that Bitcoin couldn’t, propelling Ethereum to its current position as the main blockchain for DeFi. The use of layer-2 scaling solutions such as Lightning Network, Portal, and DeFiChain has largely improved Bitcoin’s DeFi capabilities. Up-and-coming blockchains are putting a lot of pressure on Ethereum.

Solana, Polkadot, and Algorand are some of Ethereum’s fierce competitors. Each one addresses Ethereum’s present problems. These up-and-coming protocols would be eager to take Ethereum’s spot as King of DeFi if the entire rollout of Eth2 is not executed effectively or continues to be delayed.

In 2021, Ethereum had extraordinary growth, increasing daily active users. It features real-world application use cases, with a total value locked in of Defi blockchain applications. Lending, derivatives, asset management, stablecoins, trading, and insurance are just a few of the services provided by decentralized applications on Ethereum. However, because of the blockchain’s growing popularity over the last several years, it has become a curse.

The Ethereum platform, which is decentralized, is already opening up new possibilities. It has the ability to radically change the internet’s structure. The nicest feature is that the server will never go down, making the apps unavailable at any time. Several platforms on the Ethereum blockchain offer benefits to their users. BuzzShow Network is one of the most well-known platforms. The BuzzShow Network is a blockchain-based decentralized video platform. The Network’s users are rewarded with “Goldies,” an Ethereum-based platform-native ERC-20 utility currency. For uploading, curating, sharing, and viewing videos, users can earn Goldies. It was created with platform users in mind. BuzzShow Network is an excellent example of a user-centric social video media platform built on blockchain technology.

you can learn more about BuzzShow Network here.